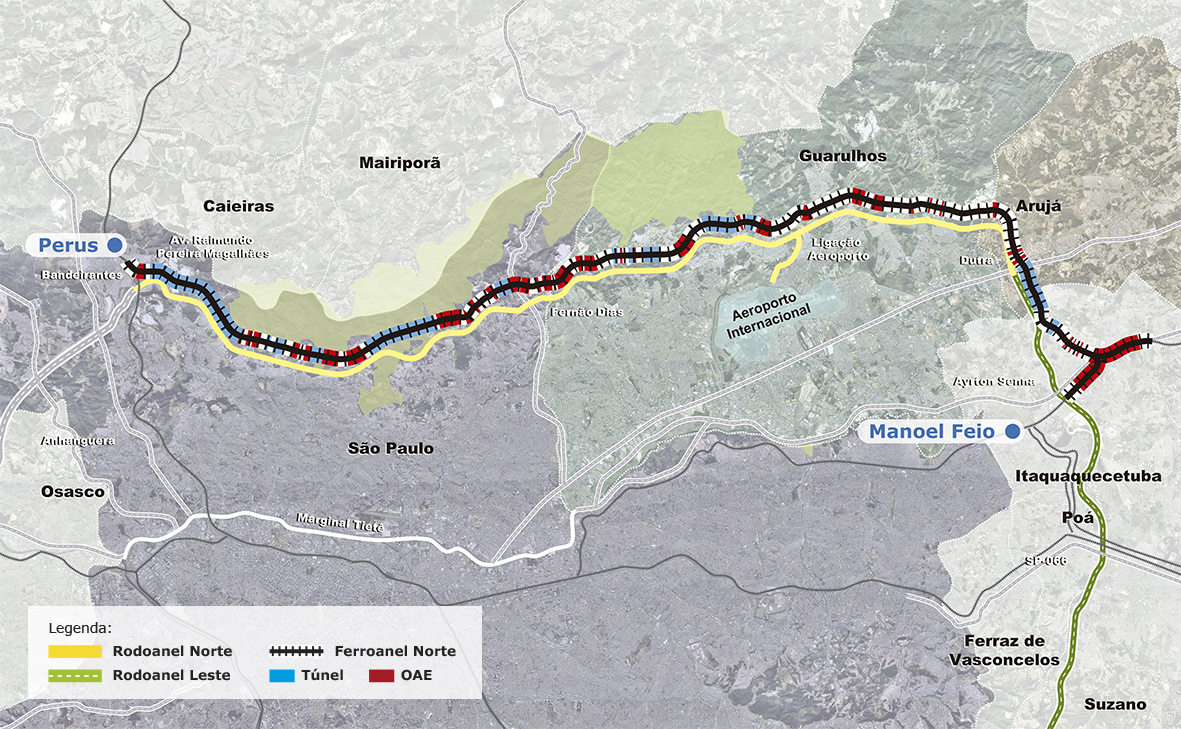 Ferroanel North will be a railway of 53 kilometers of extension, connecting the stations of Perus in São Paulo and Manoel Feio in Itaquaquecetuba, in an area contiguous to the route of the Rodoanel. Its implementation will enable freight trains that today share the same rails with the Companhia Paulista de Trens Metropolitanos (CPTM) trains to be diverted, eliminating the conflict between cargo and passengers on the rails that cut the Metropolitan Region of São Paulo (MRSP).

The new branch will allow the movement of cargo from the interior of the State to the Port of Santos, as well as the passage of trains between the interior and the Paraíba Valley. The transposition of the São Paulo Metropolitan Region into a dedicated highway will have the function of transferring loads, now road, to the railway mode. The projections indicate the medium-term removal of 2.8 thousand trucks / day from roads with a good possibility that this number surpasses 7.3 thousand trucks / day over time.

The migration of the asphalt to the railroad will alleviate São Paulo’s transport matrix, now suffocated by the absolute predominance of trucks in the provision of this type of service (currently more than 80%). In addition, studies indicate that about 40% of freight travel is carried out with empty trucks, because companies are not always able to provide the service to and from the airport. This heavy road traffic converges, in large part, to the MRSP and to the Port of Santos. The result is the saturation of traffic in the MRSP and in the vicinity of large urban centers, where traffic jams become more and more frequent.

From the point of view of passengers, the release of the current rails for CPTM's exclusive use will allow the reduction of the interval between trains, the implantation of new signaling systems and the improvement of the railway stations, which will bring greater capacity of transport and comfort to the users.

These studies served as a basis for the federal government, through the EPL (Empresa de Planejamento e Logistica), to request in 2013 that the Northern Section of the Beltway project (started in March, same year) to preserve the spaces and conditions for the implementation of Ferroanel. In response, the government of São Paulo presented a synergy plan between both projects and received an additional R$ 332 million contribution from the Ministry of Transport so that the Northern Rodoanel project would have their area of extended domain and receive complementary earth levelling that not only would guarantee the viability of the future railway branch, but would also result in savings of around R$ 1.3 billion at the time of its implementation.

In 2015, EPL and DERSA closed a new partnership, this time aimed at developing an engineering project that would allow the federal government to budget and include the venture in its concession program, as well as obtaining the previous environmental license of the project. The choice of DERSA was due to the expertise acquired throughout the process of planning and implementing the Mario Covas Beltway.

The EIA and RIMA will serve as a basis for the analysis of the environmental viability of the project and its discussion with the population. The study was prepared by DERSA, a company linked to the Government of São Paulo State, with funds transferred by EPL, a federal state company.

Basic Studies and Project Elements are due to be completed in October 2018. Although the concept of the project is not yet transposed by the drawing boards, a figure of R $ 3.4 billion for the project is being worked on today.

With the implementation of Ferroanel North, the interference in urban traffic and the economic and environmental damages tend to retroact gradually. In addition to avoiding the spread of conflicts between passenger and cargo rail operations - which threaten the heavy public investments made in the rail system - eliminating these critical bottlenecks gives rail transport ample capacity to expand its services.

Segregation will allow freight trains to cross the metropolis without the need of using CPTM railway network, which undergoes a marked increase in capacity supply, reducing interval between trains and improving the quality and safety of the service provided. These benefits will be perceived directly by passengers.

The movement of cargoes by the Port of Santos demands of Via Anchieta a capacity of flow that will be saturated in a few years. The scenario of difficulties is accentuated when the projections indicate that the Port of Santos will maintain its primacy. Its movement in 2016 exceeded 113 million tons. Of the US$ 322 billion obtained with Brazilian foreign trade in 2016, no less than 28.5% were served by Santos. The volume of cargo represents about 12% of the total nationally.

To give an idea of ​​Ferroanel North's strength against these figures, cargo handling forecasts, including those destined for or originated in the Metropolitan Region of São Paulo, are expected to reach 67 million tons per year by 2040, especially containers, steel, cement, vegetable grains (soy, bran and corn), sugar, sand (for the glass industry), fertilizers, cellulose, ores and coke. Freight for these loads is estimated to be, on average, 15% cheaper when compared to road transport.